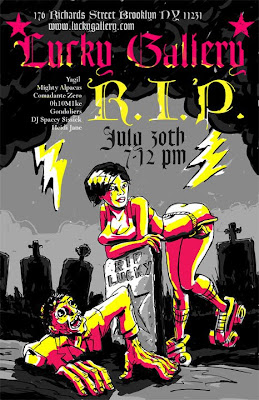 Sad to hear that Lucky Gallery in Red Hook is closing it's doors. They are having a closing party blowout on Friday night.

Here's what they have planned:

On July 30th, 7-12pm is the closing party for the final exhibition “Arc Angle” and for Lucky Gallery. “Arc Angle”, is a full scale (floor-to-ceiling), atmospheric installation featuring 13 New York City based artists.

This is a celebration of more than a year of Lucky exhibitions and events and includes musical performances by Yagil, Mighty Alpacas, Comadante Zero in collaboration with visual artist 0h10M1ke and from Boston, the Gondoliers. In between sets enjoy the sounds of DJ Spacey Sissick who will end the evening with sweaty dance party and with ongoing performance by Boston peformance artist Heidi Jane.

Beer and wine will be provided with special drink specials over the course of the night. Come and say goodbye, buy a Lucky Gallery t-shirt, and enjoy an evening of some of the best entertainment South of Brooklyn in the tropics of Red Hook!

You can check out more details about the artists involved here.
Posted by Lisanne 0 comments

Brooklyn Bridge Park the other night... 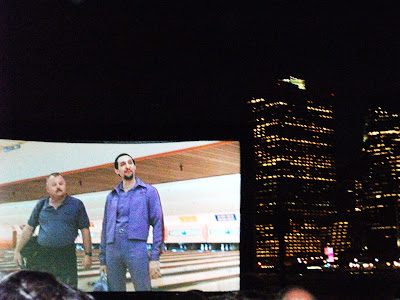 John Turturro is from Brooklyn, no? Next Thursday's film is Hitchcock's "Rear Window", which, I think will look quite spectacular in this setting. 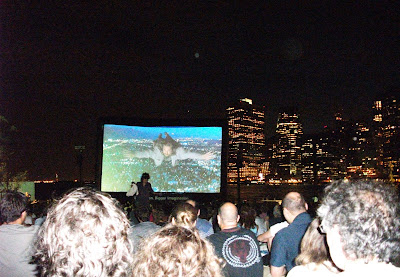 The Dude!
Posted by Lisanne 1 comments

Artic Blast From the Past 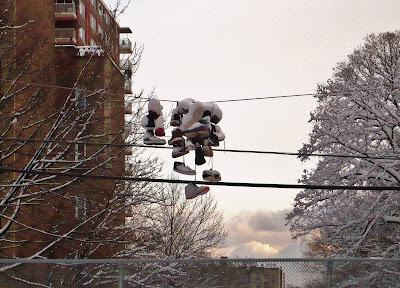 Morbid Ink: Field Notes on the Memorial Tattoo * Tuesday @ the Observatory (it's a lecture) 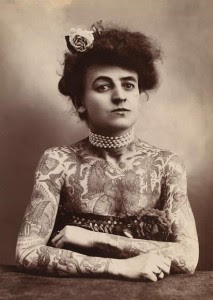 The Observatory continues to host unique lectures and events presented by Morbid Anatomy DESPITE the heat...tomorrow night is a lecture about Memorial Tattoos!

"In 1891, Samuel F. O’Reilly of New York, NY patented the first “…electromotor tattooing-machine,” a modern and innovative device that permanently inserted ink into the human skin. O’Reilly’s invention revolutionized tattooing and forever altered the underlying concept behind a human tattoo, i.e., the writing of history on the body. Tattooing of the body most certainly predates the O’Reilly machine (by several centuries) but one kind of human experience remains constant in this history: the memorial tattoo.

Memorial tattooing is, as Marita Sturken discusses the memorialization of the dead, a technology of memory. Yet the tattoo is more than just a representation of the dead. It is a historiographical practice in which the living person seeks to make death intelligible by permanently altering his or her own body. In this way, memorial tattooing not only establishes a new language of intelligibility between the living and the dead, it produces a historical text carried on the historian’s body. A memorial tattoo is an image but it is also (and most importantly) a narrative.

Human tattoos have been described over the centuries as speaking scars and/or the true writing of savages; cut from the body and then collected by Victorian era gentlemen. These intricately inked pieces of skin have been pressed between glass and then hidden away in museum collections, waiting to be re-discovered by the morbidly curious. The history of tattooing is the story of Homo sapiens’ self-invention and unavoidable ends.

Tattoo artists have a popular saying within their profession: Love lasts forever but a tattoo lasts six months longer.

Dr. John Troyer is the Death and Dying Practices Associate and RCUK Fellow at the Centre for Death and Society at the University of Bath. He received his doctorate from the University of Minnesota in Comparative Studies in Discourse and Society in May 2006. From 2007-2008 he was a Visiting Assistant Professor in the Department of Comparative Studies at The Ohio State University teaching the cultural studies of science and technology. Within the field of Death Studies, he analyzes the global history of science and technology and its effects on the dead body. He is a co-founder of the Death Reference Desk website and his first book, Technologies of the Human Corpse, will appear in spring 2011.

Click here for their full on calendar of equally fascinating and offbeat events.

When: Tuesday, July 20th at 8pm
Where: 543 Union Street at Nevins St.
Enter through Proteus Gowanus gallery, in the alley off Nevins St.
Admission: 5 bucks.
Posted by Lisanne 2 comments 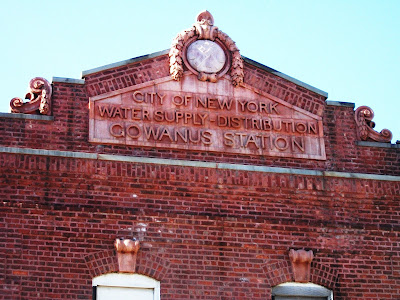 Just passing along this info. You know those pipes that appeared in the Gowanus a while back that later were submerged and are marked by those floating balls? Apparantly they have successfully added enough oxygen into the canal to sustain the temporary shutdown of the Flushing Tunnel. I hope so because the canal has been smelling and looking nastier than I have seen in years!

The Department of Environmental Protection is holding a press conference to announce that this is so. The community is welcome to attend and to hopefully find out more.

As per their email:

Please join the New York City Department of Environmental Protection for a press conference on Monday, July 19, 2010 at 10:30 A.M. at 213 Douglass Street, Brooklyn. There, Deputy Commissioner of Sustainability Carter Strickland will announce the successful operation of the temporary Oxygenation System. This key milestone which will add oxygen to the Gowanus Canal during the planned shutdown of the Flushing Tunnel.

This work is being undertaken to support the $140 million Gowanus Facilities Upgrade, which will decrease the number of combined sewer overflows to the Gowanus Canal. The upgrade is scheduled for completion in summer 2013.

When: Monday at 10:30 AM
Where: 213 Douglass Street (near Nevins)
Posted by Lisanne 0 comments 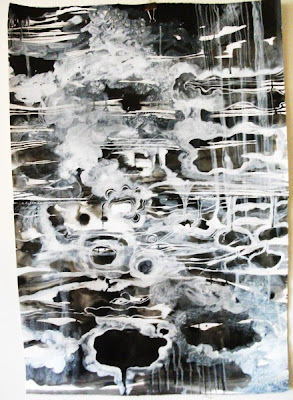 Proteus Gowanus is closing down for the summer after tomorrow. It's your last chance to check out the current Underwater New York show which, yours truly (see above) has a piece hanging in. If art is not your thing, perhaps buying books is!

Here are the details as per Proteus Gowanus:

Please Join Us to Celebrate our Summer Closing
with Jazz, Wine and a Big Book Sale

A wide and eclectic assortment of mostly used books from Reanimation Library, Cabinet Magazine, Morbid Anatomy Library, Observatory, Proteotypes and Proteus Gowanus will be on sale

Proteus Gowanus will be closed from July 19 through Labor Day. Study Hall will reopen September 6 and the gallery will open the following weekend. Meanwhile, the Writhing Society will continue to meet on Wednesdays at 6:30 pm and the Fixers Collective on Thursdays at 6:30 pm. Observatory, Reanimation Library and Morbid Anatomy Library can be visited by appointment. Observatory will continue to host programs throughout the summer.


Hope you can stop by!

Who Needs the Hamptons? 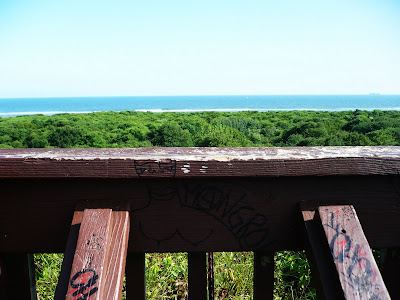 F.I.B is still alive but moving kind of slow in this heatwave. I cooled off at Fort Tilden the other day. Amazing how it is located within New York City (on the Rockaway Peninsula, Queens) limits yet so ghostly, peaceful and natural. If it were not for the distant hazy skyline of Manhattan in the background, I would of thought I was on Fire Island or Cape Cod or something. 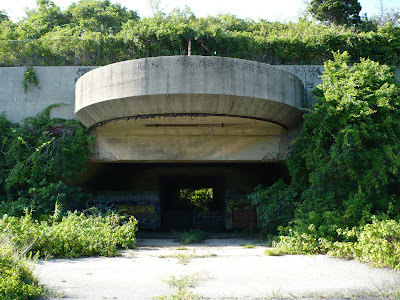 Fire Island does not have structures like this, which were built to protect New York Harbor from foreign invaders. The appearance of it amongst the greenery reminded me of that scene in "Planet of the Apes" when Charlton Heston comes across the bombed out Statue of Liberty on the beach. Although not as dramatic (not many can top Charlton in that department) Fort Tilden has that kind of vibe. 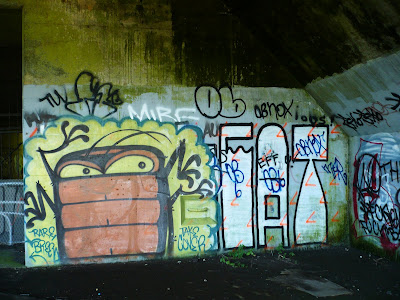 The insides of these structures have been bombed with some of the best graffiti I have seen around. 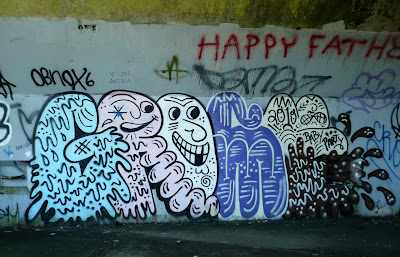 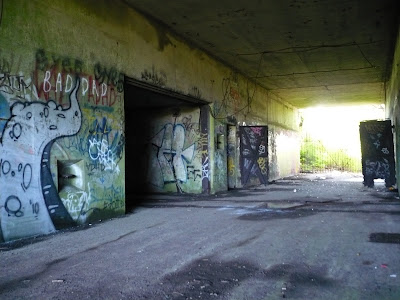 You quickly forget about those last vestiges of urbanness once you get past the remains of Fort Tilden and you are left with a peaceful, natural beach. On the the late afternoon I was there, there were hardly any other humans to be found. And the few that were there were au natural. 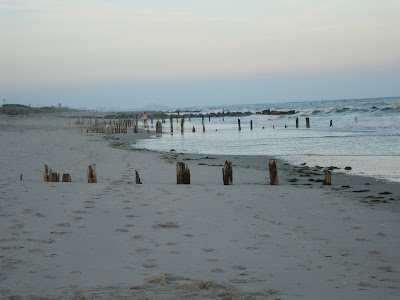 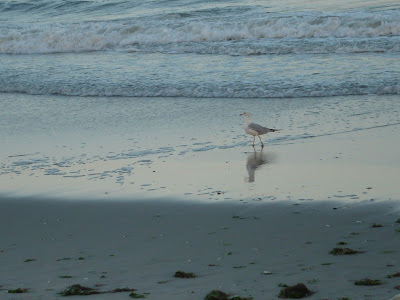 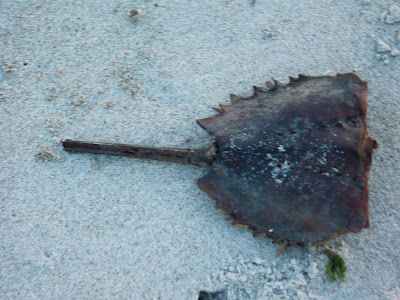 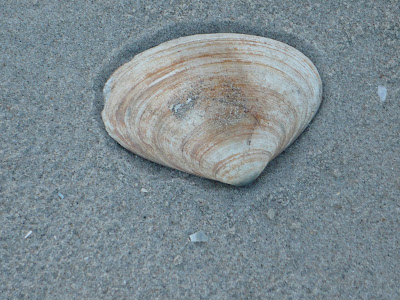 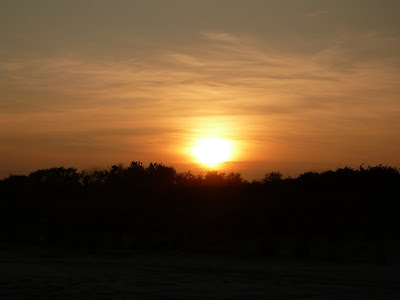 F.I.B stayed till the sun set and found upon leaving the beach that the buildings on the grounds of Fort Tilden were no longer ghostly and had come to life. There was a lot going on! On Thursday nights the Rockaway Artists Alliance has a free open mike starting at 8pm and there seemed to be some punk rock bands getting ready to go.

And! Upon seeing some men wearing skirts it was learned that the final dress rehearsal going on for "A Funny Thing Happened on the way to the Forum" by the Rockaway Theatre company. It's playing for the next couple of weeks. Click for the schedule here. I am sorry I missed their production of one of my favorite movies, Cactus Flower! The Odd Couple is coming up next!

Hope you are all keeping cool! You don't need to be rich to go to the beach, all you need is $4.50 or a bike to get you to Coney, Brighton, Riis Park, Fort Tilden and Rockaway Beach! While the beaches at Coney and Brighton are great for people watching and eating food and drink from the various vendors (both legal and illegal), the beaches in the Rockaways offer a more calming natural experience. Also!The pools are free! F.I.B has been swimming laps at the Double-D pool in Gowanus. Click here for a full list of NYC pools.

Between the beaches, the pools, the free outdoor concerts and movies, you have no excuse to complain that you are "stuck in the city this summer!"
Posted by Lisanne 3 comments This scene is right out of a Love and Rockets comic book... 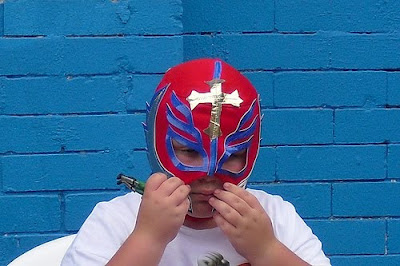 These photos were actually from last summer, my camera is broke and I feel naked..Coney Island was packed out over the 4th of July weekend, wish I could of shared it with you!
Posted by Lisanne 3 comments