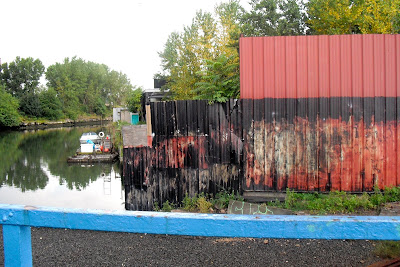 If you have been to any community meetings in the past regarding the nomination of the the Gowanus Canal as a Superfund site, you are familiar with the city's spokesperson,Cas Holloway. Well today our fair Mayor named Mr. Holloway to head the Department of Environmental Protection. I would like to alert you that the man is a lawyer with (and I quote from the Daily News)

"no experience running an environmental or engineering agency."

Anyway, on Thursday night some people who actually have experience in an Environmental Agency -The EPA- will be hosting a public information meeting for the community.

The U.S. Environmental Protection Agency (EPA) invites you to attend a public information meeting to discuss upcoming activities at the Gowanus Canal.This meeting will include a formal presentation followed by a question and answer period. 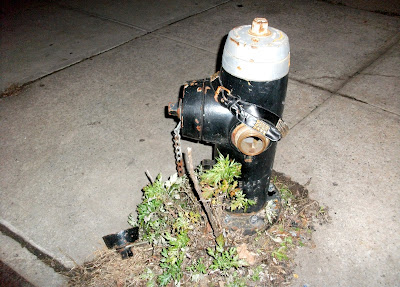 Stumbled across another forgotten belt around the Gowanus. I really don't know what to think of this picture except that that belt just looks like it just BELONGS there.
Posted by Lisanne 0 comments

"Who Walk in Brooklyn" writes to Luc Sante (and he answers!) 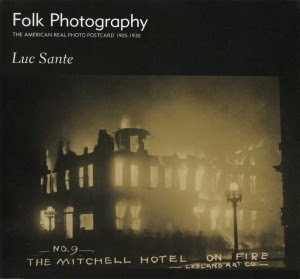 A fan of Luc Sante? Like old postcards? Then you will *DIG* the interview done by frequent F.I.B photo contributer, Brian Berger.

And GET this! The interview was actually done via post written by HAND on old postcards. Brian not only talks old postcards with Mr. Sante but asks him compelling questions such as, "Who would you rather have seen lecture, Emma Goldman or Carry Nation? Neither mourned the assassination of President William McKinley, shot by the anarchist Leon Czolgosz at the Pan-American Exposition in Buffalo on September 6, 1901."

You can see Lucs' answer below, but better yet go read it at Who Walk in Brooklyn!
. 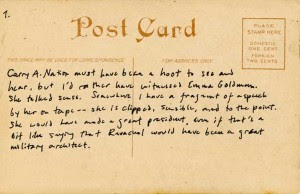 P.S- Berger is on a roll, he interviewed Jonathan Lethem the week before, check it here!
Posted by Lisanne 0 comments 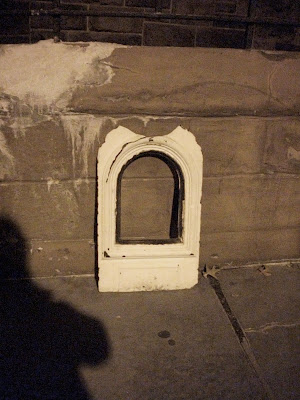 I was lucky enough to find this very cool gothic style (from a victorian era brownstown I'm sure) tin wall detail on Sterling Street last night. Not perfect but pretty cool.
Posted by Lisanne 0 comments

EPA Reveals that the City of New York is a Gowanus Polluter! 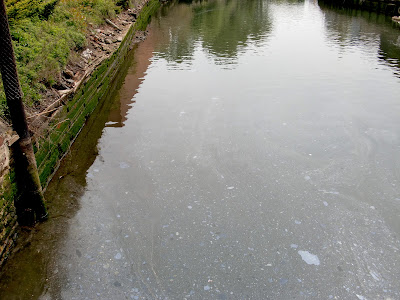 The Gowanus was particularly foul smelling last night and as I was crossing over the Carroll Street bridge I mused over the battle of the Superfund. The whole ongoing brouhaha over the City's plan vs. the Feds, pitting developer against community and whatnot. How the City only got interested when there was potential for development to be stalled while the canal got the environmental clean up it so needed. How DESPICABLE it was that the city OK'd bringing large new condos and thousands of new residents into a place that is an aquatic brownfield.

So, today, despite the gloomy weather, I felt the sun shining on me when I read the news that the EPA is going ahead as planned and ignoring the City's stall tactics. Hey guess what? The City is one of the major polluters! No surprise here. Bloomberg's sudden interest in cleaning the canal was pretty transparent. The other polluters named so far are the U.S. Navy, Con Edison and chemical maker Chemtura. The EPA sent letters letting them know that they're suspected polluters who will have to pay if the canal becomes a Superfund site.

Also a recent article in Architect's Newspaper,entitled,Twice as Smelly it was called to attention that seven years ago in Mayor Bloomberg's first term, Bloomberg pulled a publicity stunt similar to his most recent in October where he announced the investment to a clean waterway. Seven years later, it hasn't happened. I quote from the Architect's Newspaper:

" The 2002 cleanup was to bring the city in compliance with the Clean Water Act, which was being violated during heavy rains that swamped the system and sent sewage into the canal. By 2005, when the improvements still had not been made the state filed a consent order compelling the city to come into compliance. But it was only this October that the mayor finally re-pledged the 150 million originally promised."

Read some of today's coverage on the EPA naming some potentially responsible parties. (PRP's to those who know far too much about this!)

The Gothamist
Posted by Lisanne 3 comments

Ghost of a Used Car Lot on Fourth Avenue 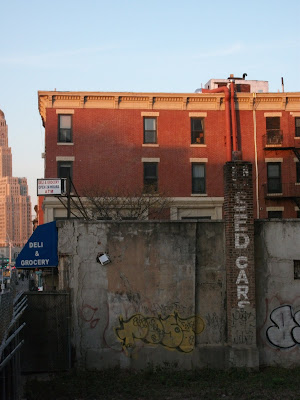 Found on 4th Avenue between the Brooklyn Lyceum and Union Street.

For more old signage, check out the blog by the man who coined the term "fading ad" here.
Posted by Lisanne 2 comments

Celebrate the fall of Communism with some Eastern European Punk Rock this Weekend! 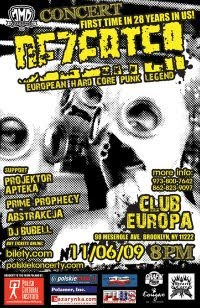 Wanna do something interesting and witness some historical legends? Show your solidarity! Dezerter are apparantly the Clash of eastern Europe, I have been listening to some of their tunes and I can feel the similarities except these guys REALLY were working for the Clampdown!

From the Rebel Waltz Festival's description:

Legendary Polish hardcore punks DEZERTER are coming to the United States for the 1st time in nearly three decades. The band - who began operations in 1981 as SS20 - remain one of Poland's most well-regarded underground punk bands and one of the few non-English-speaking groups to actually attain international notoriety outside of Eastern Europe. Their extensive catalogue shows the band only improving on their sound over the years, as clearly evidenced by 2004's politically-charged, pile-driving masterpiece, Nielegalna Zakojca Czasu (Illegal Time Killer, Metal Mind records). If you like bands like early-Killing Joke, Dead Kennedys, DOA, Subhumans (both, UK & Candian), The Clash, the Effigies and early No Means No, these guys are in THAT league.

This tour was organized by the Polish Cultural Institute and Polskie radio and are mainly being promoted to the Polish communities in the New York, New Jersey and Chicago areas. Please spread the word!

Please refer to the following information for more details: 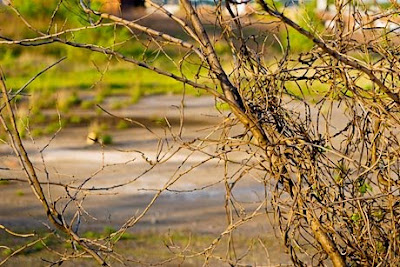 There is a stunning photo exhibit called Toxi City at the Brooklyn Lyceum, catch it before it ends next week on November 8th. The photos are taken by Robin Michals and the New York Sate Department of Environmental Conservation’s Environmental Site Remediation list was the starting point to determine sites selected to photograph.It's all about invisible contamination and there are photographs from Coney Island, Gowanus, Bushwick, Williamsberg to Greenpoint.

From the artist's description:

The exhibition Toxi City: Brooklyn’s Brownfields explores the legacy of Brooklyn’s industrial past and the spectrum of pollution in which we live. The exhibition features 30 photographs of sites in Coney Island, DUMBO, East New York, East Williamsburg, Gowanus, Greenpoint, Red Hook, Sunset Park, and Williamsburg where historic uses have saturated the soils and groundwater with a lasting toxicity. As we careen towards the greater impacts of climate change, brownfields remind us of the damage we are willing to inflict on the environment for the benefits of industrialism.To select the sites to photograph for the exhibit, the New York Sate Department of Environmental Conservation’s Environmental Site Remediation list was the starting point to determine what qualifies as a brownfield or toxic site. In addition, old maps at the Brooklyn Historical Society were consulted.

The dichotomy of pristine and polluted is no longer a useful way of thinking. The alphabet soup of DNAPLs, NAPLs, BTEXs, PAHs, SVOCs, VOCs, TCE, PCE, and PCBs that have been left behind at these sites can never be entirely removed. Their dangers can only be better managed.

In addition, the show will feature photographs of as-yet unremediated sites that once housed gas plants, electrical powerhouses, petroleum facilities and manufacturing operations or were tainted by landfill or dumping. Because Brooklyn is a dense, crowded, place, many of these sites are in use in some form today despite their toxicity.

This event is sponsored, in part, by the Greater New York Arts Development Fund of the New York City Department of Cultural Affairs, administered by the Brooklyn Arts Council, Inc. (BAC), as well as by grants from The City University of New York PSC-CUNY Research Award Program and from the Puffin Foundation. 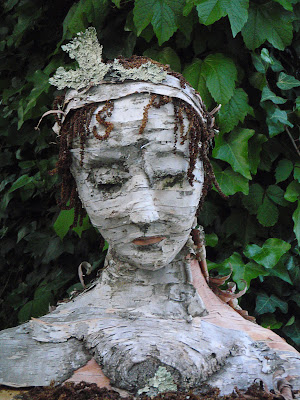 The Tabla Rasa Gallery in Sunset Park is presenting a new group show called "About Face" and it opens tonight in Sunset Park. The sculpture shown is done by my friend Jeannine Bardo who I have had the honor of meeting in the Art Education program at Brooklyn College. This sculpture "Eve" is made out of natural birch wood shavings, it is too beautiful for words!

Go see it and all the works having to do with "the face" being shown at the Tabla Rosa Gallery.

Do NOT forget to vote Bloomberg out of office tomorrow. Voting will be light as the man has beat many down with his bloated self confidence and bank rolled media campaign. POLLS ARE OPEN FROM 6am to 9pm. You have no right to complain about Bloomberg unless you vote!

Enjoy some of his legacy. Thanks to him we have to look at/into the un-curtained windows of glass and steel condos. Many are empty while many are poorly decorated! 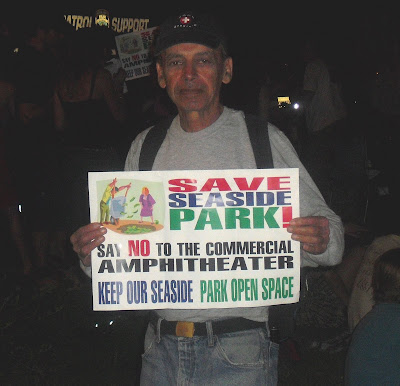 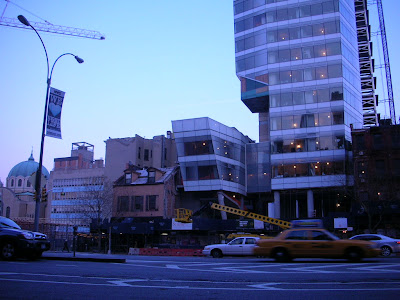 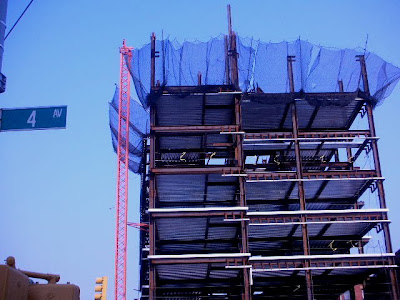 Atlantic Yards, Coney Island, Gowanus, Williamsburg, Long Island City, the lower east side, all uglified or on their way to become uglified. Get this man O-U-T!
Posted by Lisanne 0 comments