Yes We Did! and Amanda Burden comes to Gowanus... 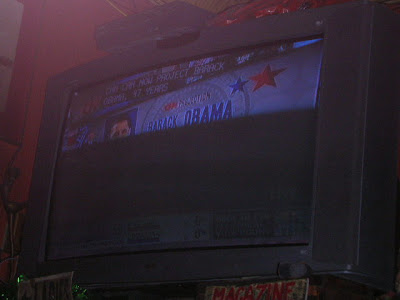 Lame picture I know but it is OF THE MOMENT!!!
Yes I am floating on a cloud that Barack Obama is our new President! Yesterday I heard a kid say in the school that I work in which is predominately African American and Latino that he "wants to be President when he grows up" and it really hit me. It's not just "a dream" anymore, it's a reality. 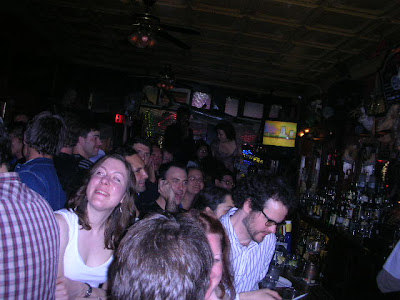 I was at Freddy's the night of the election and was so glad to be out in the world. People were crying during his acceptance speech and they weren't even from America! Anyway I had did a post at 3am when I got home but it was so crazy basic juvenile that I pulled it, something I never did, but hey I am still feeling that "gee whiz" uber optimistic feeling I had that night. Walking home up 5th Avenue was an experience I will never forget. People celebrating on the corners and even the cops and the firemen were beeping their horns. Too bad my camera died but lately I have been taking less pictures anyway, as I feel that the world is getting over documentated! I just want to BE. And I say that with no pretention, just want to get back to living. Blogging was fun for a while but now I won't be posting as much. Long story.

BUT I do want to say that THE Amanda Burden of the NYC Department of City Planning is coming to PS 32 Monday night to discuss the development of the Gowanus corridor. Wish I could go, but grad school (one of the reasons I won't be blogging as much I am sooooooo in another headspace these days) calls me. Here are the details and if you go please make sure to let that woman know that the Troll Brothers condo is an environmental Love Canal boo boo just waiting to happen. But they don't care. Let's get Obama to help us!!! Cause Community Board 6 certainly WON'T!

The Executive and Landmarks/Land Use Committees of Brooklyn Community Board 6 are pleased to host.

A Forum with Amanda Burden,
Chairperson of the City Planning Commission

An informational update by Commissioner Burden on the department's land use activities related to the Gowanus Canal corridor.

Developed from January through July 2007, the Department of City Planning created a land use framework for the Gowanus Canal corridor. The framework is a set of guiding principles relating to issues including use, density, bulk, and waterfront access, intended to provide standards for formulating and evaluating proposals for future land use changes. Building upon the developed framework, in May 2008 the Department of City Planning shared its draft rezoning proposal for 25 blocks along the Gowanus Canal with Brooklyn Community Board 6 and the community-at- large. Commissioner Amanda Burden will meet with the community to give an informational update on the status of the department's land use activities and address any concerns.

Bring your neighbors! Bring your friends! Find out what's going on.


and P.S for those that know my personal traumas of the last 6 months, I'm home once again!
Posted by Lisanne

I hope grad school is going well- I'm getting prepped for going down that path ::crosses fingers::

Isn't that the framework that was bought with the $360,000 lobby money spent by Toll?