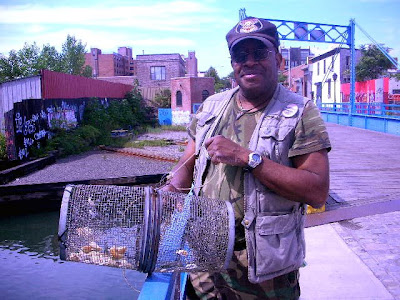 I am reposting this from back in September as there has been some comments stemming from the Superfund meeting earlier this week about whether people actually catch fish in the canal. Here is your proof! While I do not advocate the use of the spearing fish Weah caught for use for bait, it just goes to show you, fish are swimming and people are fishing!

Yesterday afternoon as I crossed the Carroll Street bridge I stopped to chat with this guy who was fishing for something in the canal. I was relieved to hear that he had no plans on eating these fish he said were called "spearing fish". These fish are also called Atlantic Silversides which according to Wikipedia are the most common fish in the Chesepaeake Bay. What he does is sell them on the fishing pier of Coney Island for bait at 2 dollars a bag. He was surprised that he was catching so few today as other times he said he can fill his whole bucket in an hour and he was particularly surprised because the tide was high after the rains on the canal. Weah has lived in the neighborhood since he was a child (he went to PS 32 at Union & Hoyt) we chatted about all the marine life and changes in the canal he has seen through the years. It's gotten a lot better but there is still way more toxic sludge, plastic and sewage than there really should be. Apparently they sell spearing fish in Chinatown for over two dollars a pound, hopefully they were not caught in the Gowanus!

Also! If your motorcycle needs a tuneup or fixing, Weah is a Motorcycle Technician. He can be contacted at Robertsreplicas(at)aol(dot)com.
Posted by Lisanne