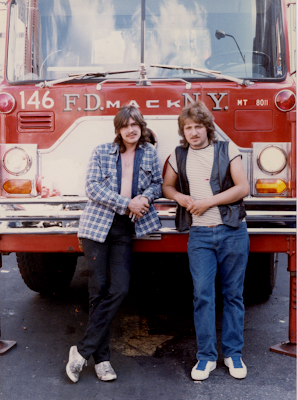 I posted this photo I found in a huge lot of photographs I came across about a year an a half ago. The strange juxtapostion between metal stoner dudes and fire truck intrigued me as well as made me laugh for some reason. It was one of my faves out of the over a thousand photos that i had.

Well guess what? Someone saw the photo and recogonized the guy on the right, contacted him and then he contacted me!

When I originally posted this my photo description was:

"Do you think these guys are hipsters or just fireman wannabes?"

Ends up there WAS a reason they were posed in front of a fire truck. They saved an elderly lady from her burning apartment 22 years ago on Russell Street in Greenpoint.

Read the words straight Tommy Scudiero (the guy on the right with the fat laces) mouth here!

"June 6th 1985. Me and Dave Monat just ran into a burning building on Russell street and saved an old lady. We ran up the fire escape. He had a fire extinguisher and we went to break the window and Dave squirted the fire extinguisher in my face . That picture was taken by the Greenpoint Gazette."

Here is the photo from the Greenpoint Gazette! 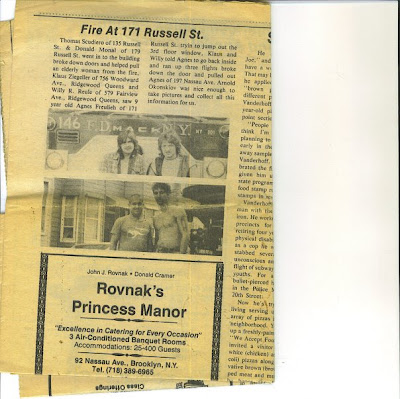 I just KNEW there was a story behind this photo and thanks to the keen observation skills of someone who grew up in Greenpoint and stumbled onto F.I.B one day, this mystery was solved! Thank you!

Read the original post about the photograph here!
Posted by Lisanne