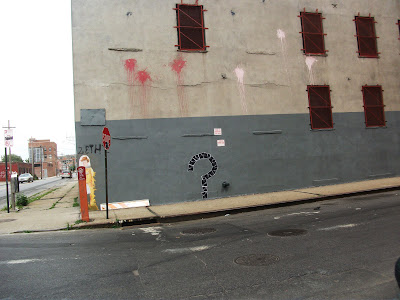 I was pretty horrified on how the Brooklyn Blogfest was more about that vodka that begins with an “A” than anything else. As someone who turned to blogging to escape the man, I wanted to escape this blogfest but was so shocked at the corporate branding and the blogs being secondary to the whole event that I just had stay to watch this corporate love fest. In the past the actual bloggers were given a face to their blogs and that was the whole point, you got to finally meet the people behind the blogs. At this year’s blog fest, an actor did the “shout out” and if you didn’t know the blogs, or were into hip hop style poetry you wouldn’t really know what the hell he was saying.

The appearance of Marty Markowitz was the cherry on the sundae. If the organizers of the blogfest wanted to alienate many of the bloggers in the audience who have spent the last couple years fighting the Atlantic Yards, the Sitt invasion of Coney Island or the Toll Brothers plans for the Gowanus, they did it here. I was incredulous!

Spike Lee graciously admitted he really didn’t know much about blogs and it is was just so painfully apparent that this was all about this vodka company using the blogs for free advertising for their new Brooklyn vodka! Apparently, many blogs were approached to pimp their vodka with the award of a flip camera. I actually received this email and deleted it immediately. I actually did not even bother reading it, too much work and not F.I.B’s style. Now if they offered to pay me what they would pay a regular media outlet, I might consider. But for a flip camera?
Anyway I have to run to work and could go on and on. Check out Norman Oder’s excellent recap of the event here.

PS- On the plus side after the “shill fest” was over I did meet some lovely people including my doppelganger Lisanne!

Reminder that the doc about Freddy's is playing tonite, you can be sure that is one Brooklyn event that Marty might not have the nerve to make an appearance!
Posted by Lisanne

Marty Markowitz has broken my heart with his pushing for the development of the Yards. I remember seeing him on the M train right in mid-September 2001, urging Brooklynites to "get in shape with me, Brooklyn!" and walk across the Williamsburg Bridge (as in "let's not be terrified of bridges anymore") -- I thought he was one of the good guys.

Putz Marty Markowitz does not suprise me. Spike Lee is pathetic - he knows better, or should, if he's an artist. Blogfest organizers should have known better, too, than to invite, agree to Blogfest being used to launch a corporate product. Blogs have become a commodity for the corporate world - a real drag.

yeah being a commondity for the corporate world is not what i signed up for!

The organizer writes for the Brooklyn Paper, a paper that I have always considered a mouthpiece for Markowitz..in fact if I recall, 2 years ago at the blogfest she had Kuntzman speak and he basically put down the blogs. i did not have any plans on going but went because i was told an ancient blogpost of mine was to be read by an actor, and i had to see that.

I have to say also that even the size of the font used on the nametags given out for the bloggers was miniscule..the VIP's seemed to all be from Brooklyn Industries and Absolut.

The in between talk about how great and hip Brooklyn was made me want to move to Staten Island..BOR-ING!

Originally, I didn't have much of a problem with the sponsorship, or the Absolulusomethingsomething co-opting of a good 15-20 minutes of programming. Partly because I found Outside.In's messaging highly intrusive last year. But also partly because I don't think the rest of the programming was that good. Last year's event struck me as very focused on the OTBKB-orbit of blogs. Didn't see anything that acknowledged the existence of sites like Free Williamsburg (hipsters), Brooklyn Vegan (music), Greenpointers (neighborhoods not named Park Slope), or others. I was only riveted by the parts where I could walk around and meet other bloggers.

This year, that point was driven home right off the bat with the Blogs Out Loud segment. Not nearly as pretentious as it could have been, yet I had to shake my head at the inclusion of the Bed Stuy Banana. Loved that blog, but she hung up the cleats months ago. So there are no active bloggers in Brooklyn that are worth including in such a segment? Really? Or maybe just no one in the organizer's immediate orbit. That's probably it.

Truth is, Spike Lee seems to be medicated. The fact that he had no connection to blogs and the ridiculous repartee between him and Marty and that BS about going to a Nets/Knicks game, like we all give a shit, was sickening.

Also, where were the social activists? I sat with 2 other people in our breakout group. It seemed there were more people there to talk about "Cake recipe" blogs then about what is happening in our respective communities.

I will attend again, but with caution, unless someone here comes up with a controversial alternative.