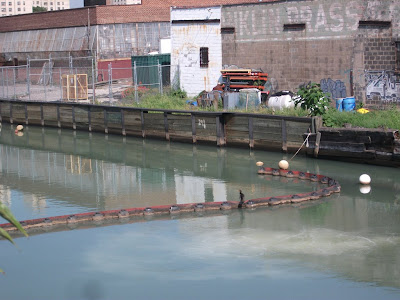 Much of this was known but now that it is OFFICIAL and in more detail hopefully this will deter organizations such as the Gowanus Dredgers from encouraging people to have contact with the water and land around the canal.

(New York, N.Y.) The U.S. Environmental Protection Agency has completed its investigation of the Gowanus Canal Superfund site in Brooklyn, N.Y. The investigation confirmed the widespread presence of numerous contaminants in the canal and identified the sources of contamination. The investigation also identified characteristics of the canal that will influence future plans for a cleanup. A companion human and ecological risk assessment found that exposure to the contaminants in the canal poses threats to people’s health and the environment.

“The findings of the investigation of the Gowanus Canal confirmed that contamination of the urban waterway is widespread and may threaten people’s health, particularly if they eat fish or crabs from the canal or have repeated contact with the canal water or sediment,” said EPA Regional Administrator Judith Enck. “The next step is the review of options for cleaning up the Gowanus, so we can move ahead with a full-scale cleanup of the canal that will result in a revitalized urban waterway.”

EPA’s investigation confirmed the widespread presence of more than a dozen contaminants, including polychlorinated biphenyls (PCBs), polycyclic aromatic hydrocarbons (PAHs) and various metals, including mercury, lead and copper, at high levels in the sediment in the Gowanus Canal. PAHs and metals were also found in the canal water. PAHs are a group of chemicals that are formed during the incomplete burning of coal, oil, gas, wood, garbage, or other organic substances. PCBs were used as coolants and lubricants in transformers, capacitors, and other electrical equipment. PCBs are suspected carcinogens and can have neurological effects. PAHs are also suspected carcinogens.

The results of the investigation, referred to as a remedial investigation, are in a draft report which is available for public review online and at the EPA’s document repository in Brooklyn. Links and locations are provided below. Based on the results of the investigation and the human and ecological risk assessment, EPA will commence work on a study that will outline all of the options for addressing contamination in the Gowanus Canal. This study, called a feasibility study, will take place over the coming months. It is anticipated that a draft feasibility report containing an assessment of all options will be completed by the end of this year.

EPA’s investigation also confirmed that a combination of historical and ongoing sources have contaminated the Gowanus Canal. Past industrial activities along the canal contributed a large amount of contaminants that were found in layers of sediment below the surface. A number of industrial facilities are among these sources, including three former manufactured gas plant sites along the Gowanus Canal. Uncontrolled discharges of sewage, storm water and other types of discharges into the Gowanus continue to contaminate the canal.

The remedial investigation identified several site-wide issues to be addressed before cleanup activities can proceed. The stability of the bulkheads abutting the canal could be threatened by dredging activities that could be used to remove contaminants. In addition, debris of various sizes is pervasive in the canal, including sunken vessels near the 4th and 6th Street basins. During the investigation, EPA collected and analyzed more than 500 samples of sediment from the Gowanus Canal and more than 80 water samples for the presence of various contaminants. EPA also collected more than 200 fish, including striped bass, eel, white perch and blue crab, to analyze their tissue for contaminants. Air samples were collected at street level and at heights at which people would breathe while boating on the canal.

EPA added the Gowanus Canal to its Superfund National Priorities List of the country’s most hazardous waste sites in March 2010 after meeting with government and elected officials, business representatives, representatives of civic organizations and community members, and reviewing more than 1,300 comments on its proposal to list the site."

To read EPA’s remedial investigation of the Gowanus Canal or for more information on the canal, click here. Or visit EPA’s document repository at the Carroll Gardens Library at 396 Clinton St. in Brooklyn, New York.

A year ago we were all wondering if the canal would ever be listed as a Superfund site. Remember! And now just 10 months after the listing the EPA has come through with this elaborate report covering all kinds of conditions in and along the canal.

Among all this sad data, there is hope.

Yes..sad data but there is now hope.

Before we had developers such as the Toll Brothers saying that it was safe to build by the canal, all in the name of waterfront property..they chose to ignore potential health risks. It was disgusting and an insult to the community. I am so glad that i don't have to see David Von Sprecklesen at another community board meeting sneering at people who had doubts about his project for a while..sheer arrogance and disregard..the truth has prevailed for once!

How does this effect the creeps at Whole Foods who, in my opinion, long ago squandered any and all 'good will' they might have been able to engender?

I personally boycott them 1000% because of their strong anti-union and anti-competitive business practices but I know some don't care, alas.

It's great that the EPA wants to clean Gowanus sediment but nothing is growing on the canal bottom for fish and crabs to eat! They are ingesting this contamination from either the CSOs (that EPA won't fix) or from dining on bottom growth of the rest of NY harbor. I suppose the EPA will focus on the CSO problem when they complete dredging in 2026?