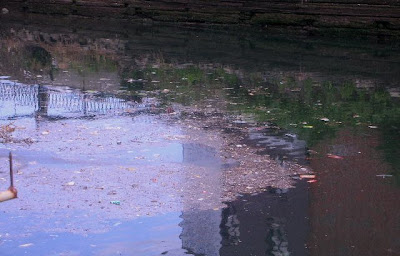 
If you have any interest at all in the clean up of the Gowanus Canal I URGE you to attend this meeting. There have been a lot of twists and turns regarding clean up and development. Residents tirelessly have dragged themselves to meetings, hearings, have sent comments regarding the rezoning of the canal for the past year. Last month the city gave approval for a spot rezoning to take place so that developers the Toll Brothers could build their condos between Carroll and 2nd Street on the banks of the canal. Any cleanup that was to be done on this site was in the hands of the developers, a frightening thought in this day and age of people being screwed by corporations and banks. There are members of the community such as Buddy and Debby Scotto, who supposedly want a clean canal but are now balking about this highly toxic site receiving Superfunds so that the Environmental Protection Agency can do a proper job before any building takes place. Now, any rational person would think that one would clean BEFORE building but NO! Scare tactics from the developers have quickly occurred. Today I received a press release from the Toll's "public policy consultant's claiming:
Superfund Designation is Wrong Way to Clean Up the Gowanus Canal With No Funding and the Promise of Lengthy Litigation, Federal Involvement Will Only Diminish Property Values, Stunt Development and Muddy the Waters" and a business on Smith Street had a stack of papers published anonymously (hmm i wonder just who it is?) pablum along the same lines. They are inviting people to come to the meeting with local real estate people and other scare tactics. The general theme is all about property values going down with no THOUGHT at ALL about just WHY the EPA feels that this area needs clean up or about health issues or the future.

Judging by the media blitz I am sure in addition to people being for or against this on their own terms, there will also be a ton of paid union guys talking about being willing to endanger their health for a job.

I would like to quote a long time member of F.R.O.G.G (Friends and Residents of the Gowanus Canal, a neighborhood group has tirelessly fought for the clean up of the canal through the correct channels:

"It would be a great loss to this community to pass up the financial help and expertise that the Superfund listing will bring to this area wide Gowanus Cleanup. It may be the only opportunity that will lead to the water complying with the Clean Water Act. (Nothing else could be better for our home values than this, nothing!Nothing else could be better for our health and well being, NOTHING! No amount of affordable housing could take the place of havinga clean waterway for our future! Having a clean waterway that supports planned developments is the only way to go.)

It would be a great loss to the community and the city as a whole if Toll and Buddy put their clout behind stopping this when,it looks like Toll Inc may not be in the financial position to build now anyway. The news on condo sales in the city is that values are to drop for another 4-5 years. With these kind of financial indicators, we should all take a step back. This may be the perfect timing to addressthe Gowanus Canal. The Pump tunnel work is to begin this spring. The Army Corp is part of that whole aeration process that will be put into place soon with much water quality testing going on during this process. The Army Corp has already done much study work--there is good science going on here--not the lopsided science that pops up in EIS's to support one opinion.

Doesn't it seem odd that the Gowanus Conservancy is hosting Gowanus Cleanup events all summer long? Do any of the environmental agencies have anything to say about community down there digging in that soil?

Is this the city's alternative-to-superfund cleanup plan?