It Came From The Gowanus: An Interview With DJ Tuxedo Laughing Gas.... 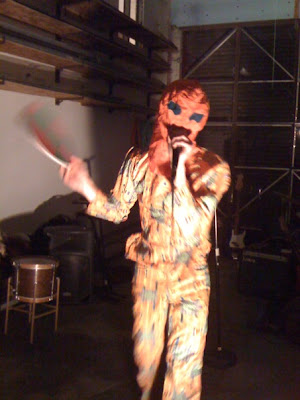 In a previous post, I mentioned I that I really knew nothing about this performer I called "Matthew". Well alert the media,the scoop has just been sent in!

After listening to the guitar crunch of Lame Drivers and the jangly twee pop of Too Big To Fail, the crowd at The Fixers Collective party on Saturday were a little unprepared for the joyous, spastic caterwauling of DJ Tuxedo Laughing Gas. Backed by a soundtrack of synth farts and bleeps, DJ Tuxedo took the floor dressed in what looked like Kente cloth pajamas and an orange Spider-Man mask. I couldn’t make out the lyrics of the songs he was singing/rapping, though my wife, Catherine, noted, “You could tell he meant business.”

He opened his 15-minute set with a declaration – or maybe it was a song title? – “I am a DJ.” His vocal range was somewhere between David Byrne and Emo Phillips – the same could be said of his convulsive dance moves. “I didn’t know whether to applaud or present him with a tongue depressor,” Catherine said after.

We were pondering this very strange act as we waited in line for the bathroom. The act was definitely nuts. It was a little annoying. But there was something about it that commanded our attention. As we were talking about it, we turned around to see DJ Tuxedo standing behind us, so we decided to do an interview.

The actual individual behind the character – though, after speaking with him, it was hard to tell which persona was the “real” one – is named Matthew Thurber. A native of Washington State, when he’s not performing as DJ Tuxedo Laughing Gas, he’s a comic book artist and has authored a series called 1-800-MICE.

While Thurber is a creature from the Northwest, DJ Tuxedo is a pure-mongrel Brooklynite, born in the murky waters of the Gowanus, he told us as someone skipped the bathroom line ahead of us.

“It’s a highly hierarchical society, where you learn mixing at age one, and DJ skills at age two and then you are usually eaten by a bird at age three,” DJ Tuxedo said, when asked about emerging from the Gowanus ecosystem. Asked to describe his musical influences, he told us the sound is “reggae-swamp, played on lillypads with razor-sharp edges. Basically, the genre is essentially American Country-Western. I make the music of American tragedy.”

Look. I love a good freak show as much as the next guy but hasn't this style of Uber Freak, stage persona already been done and done. Stop trying to be what you THINK a underground, Brooklyn performance artist would be and go out and write a song or something. Better yet, go back to Portland and start a scene there. Brooklyn knows all about you and is kinda tired of you. You can still dance around your house in your pajamas and Nacho Libre mask in the privacy of your own home where no one will have to pay to watch you writhe around while spewing your amateurish raps. Weird doth not equal talented

Just wanted to make clear that despite the snark, I'm a committed fan of DJ Tuxedo/Matt Thurber. His music might take some getting used to, but like the moss in the Gowanus -- or whatever that stuff that's oozing out of the canal is -- it grows on you.

In a perfect world, the Grammy's would be celebrating the talents of DJ Tuxedo instead of Lady Gaga.

DJ Tuxedo IS talented! And Brooklyn isn't tired of him, and probably won't be for at least 200 years. "Weird" is a pretty general criticism and says more about the person's particular taste's than anything about the performer it's directed at. That is, weird is different. So maybe you like the familiar, the conventional. No weird does not automatically equal talent. But clearly, anyone who has seen DJ Tuxedo in action knows that he is an original and he does indeed have talent. Talent, like beauty, is often in the eye of the beholder. He isn't for everyone. But then again, the truly original never are.

Quite the contrary, my friend. I prefer the non- conventional as the Author of this article can attest. I just like my Unconventional to be original and dare I say, honest. If I want unconventional, I'll go see Diamanda Galas or Peaches or someone of that ilk. I just dont find this person or for that matter, half of the crap coming out of Brooklyn these days anything more than a desperate attempt to ride a wave of Brooklyn-Mania to their 15 minutes. I also cant stand the Hipster Sheep that tell me that I dont get it. It's comparable to the early 90's when every sucky band in Seattle was signing record contracts because it was the hot Area at the time. Talent be damned.

I am going to interject my opionion here. F.I.B is too old to be a hipster. I find them funny. Sometimes I feel sorry for some of them because many seem to be trying to recreate eras that they did not live through such as the 70's and particularly the early 80's, which is when I came of age and lived in NYC. I experienced much of the stuff that the kids today wish that they have but despite that I am into 60's garage punk (and lots of other stuff but that is my love) so I guess I am just as guilty at times..I guess sometimes people have a fondness for the era that they were born in. I agree with Magill that Diamanda Galas is an example of someone that is truely unconventional. I have heard her live and she takes you to another dimension. DJ Tuxedo Laughgas was more of a party diversion. I probably would not run to see him again, once is enough. But I don't hate him for it, he made me laugh and for that I salute him.

If you check out his comics, that is where his true talent lies. Love his story lines.

I have no idea why this trash heap vaudeville is being singled out for consideration upon the front pages of the internest. Laughing Gas, and his compost heap rubbish gentrification-blues vomit, is simply the soundtrack for slumming condominium owners eating brunch for hours while rubbing their bloated ecosystems. I also attended this performance, and afterwards as I walked to the light rail stop, was sorry to witness Gas, his hair all fallen out from the nootropics he abused in the 90's, curled up in a diner booth, alone exept for a milkshake and a plate of beans, dozing off into a copy of CABINET magazine....rather pathetic

First off, yep, I can attest to Magill's excellent, thoughtful aesthetic sensibilities. So no quarrel there.

Maybe I'm a bit biased, as I spoke to DJ Tuxedo afterward and thought he was a perfectly nice, interesting individual. I didn't get the sense that he had any pretentions and as you can tell from his quote, for him, this is all about amusement (primarily his own, first and foremost). And I suspect he would enjoy getting such a rise out of people.

In fact, I wouldn't doubt it if it were Matt actually posing as an incensed commenter.

Overall, it's a tough act for me to set up. Do I defend it? Would I pay money to see him again? I'm a bit ambivalent I suppose. But his insouciant, do-it-yourself stance is so guileless and innocent, I can't see anyone hating him. I think it would be saying too much to say he represents any sort of groupset other than his own crazy self. So, Matt, keep doing what you're doing.

The lyrics might be good...hard to tell. Bring the lyrics to the fore.