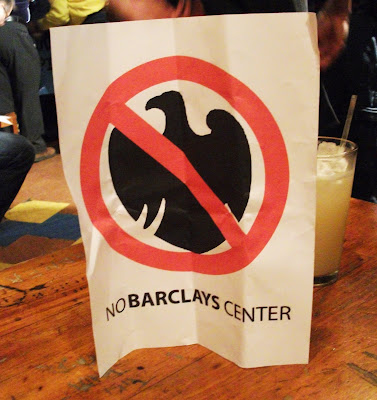 Another dark twist in the Atlantic Yards project. By way of the Develop Don't Destroy Newletter this bombshell has been dropped in the New York Post over the weekend about Russian high rolling business man Mikhail Prokhorov who "saved" Bruce Ratner's landgrabbing, illegal project in the Atlantic Yards by arriving on the scene in last fall and invested heavily in the project. Prokhorov is a 44 year old billionaire who is seeking a majority stake in the Nets and a 45 percent stake in the Barclays Center arena, which they want to be future home of the team and "centerpiece" of the Atlantic Yards plan.

Apparantly Democratic Representative, Bill Pascrell Jr., of the Ways and Means Committe has found out that Prokhorov owns several companies doing business in Zimbabwe, a country that violates human rights and forbids American citizens and companies from doing business there. If this is true, this goes way beyond any local corruption, this is big time international "international sanctions busting".

Will an investigation lead to Prokhorov leaving the Atlantic Yards project? We can only hope! The whole project has reeked of corruption from day one yet somehow is a project funded by the taxpayers who will end up with nothing but a sports complex instead of a neighborhood.

Read the whole article in the NY Post here.
Posted by Lisanne

The entire AY projects was a scam of the highest order and anyone who had ANYTHING to do with promoting it should be dealt with accordingly. Marty, Rattner, Russky here, down the line...and the Nets are the WORST TEAM! Shame, Shame, Shame.