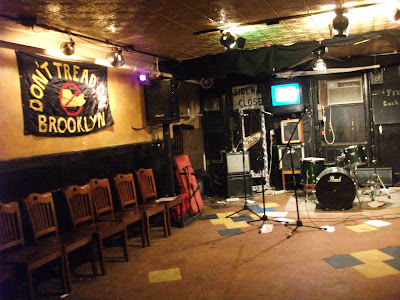 The Backroom at Freddy's.
Yes it TOTALLY sucks that Freddy's is going to be knocked down for a hideously stupid basketball stadium, but at least they will continue on in a couple of months in a new location. As Manager Donald O'Finn says, "Freddy's is not merely a building on a street corner, it is a grand idea."


I had a grand time there last Saturday night, where Les sans Cullotes celebrated their, correct me if I'm wrong, their 12th anniversary! This video captured the energy and spirit of the show, who needs steady cam when you can shoot in the round?

P.S-Freddy's is throwing a Victory Party on Friday, April 30th to celebrate the little guys who've been fighting a land-grabbing billionaire and the corrupt New York government agencies that he greatly influences.

Check this schedule for all the info you need about happenings occurring during Freddy's last week.