That Was No Hallucination! 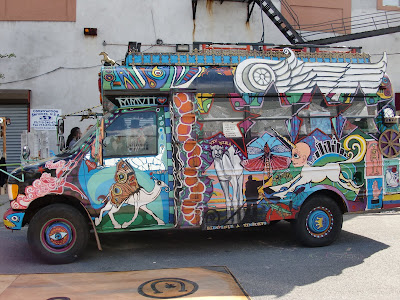 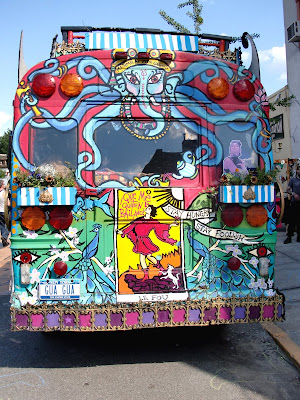 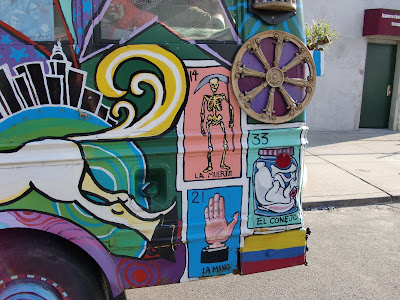 Did anyone happen to pass by 2nd Street between Bond and the canal as I did last Saturday? In case you wondering just who invaded, it was guerrilla art group The Madagascar Institute. They were celebrating their 10 year anniversary. 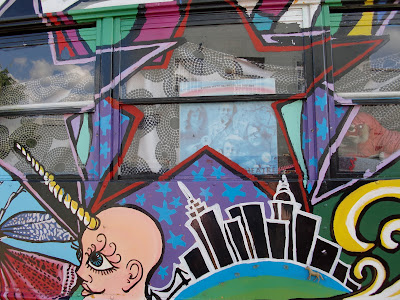 The crowd was the type that go to Burning Man, the vibe more Oakland, California than Brooklyn. 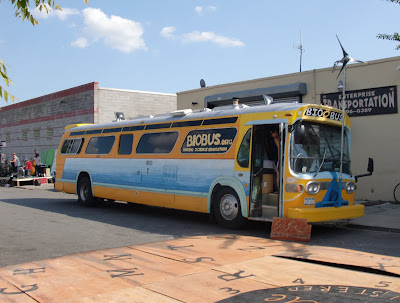 There was a "biobus" that made it's way to New York from California on recycled vegetable oil, only being pulled over once or twice the whole way! You can also see a bit of the giant plywood ouiji board on the street. 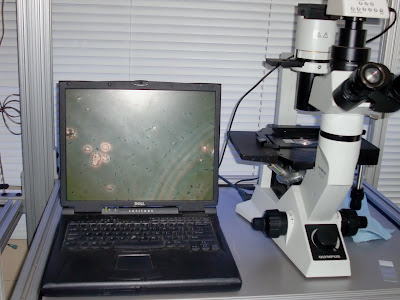 And in the biobus were microscopes with sample of the Gowanus water. This one here shows nothing because all the bacteria is DEAD DEAD DEAD! By the way, The BioBus "is a converted transit bus equipped with digital microscopes, a cell culture lab, and a computer cluster. The bus travels to schools, community centers, and museums, where students collect live cells from their environment, make movies of the cells crawling, and then analyze these movies on the computer. Activities emphasize the joy of discovery and foster scientific creativity by building on students' own hypotheses." Click here to read more. 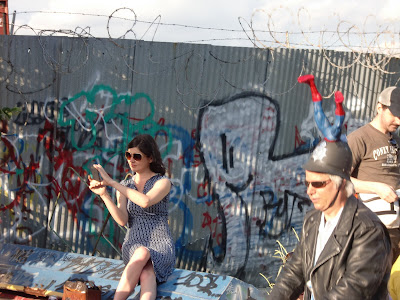 Yes this is a grown man wearing a helmet with upside down spider man legs glued to the top on a see saw. Also going on at this surreal event were lots of somewhat dangerous sculptural things such as this giant see saw. There was a metal surfboard on springs that I saw someone fall off of and a big thing at the end of the night called "The Time Machine" that was all lit up at the edge of the canal. As we waited with anticipation at the end of the night for this thing to shoot into the heavens or something, a woman singing "The Star Spangled Banner" was suddenly heard. And lo and behold she came sailing over the canal on a rope, pulley, swing type thing, all 300 pounds of her in a ball gown and pulls the "The Time Machine" down. She didn't fall into the water though, so that's good. I am sure the EPA wouldn't be happy about this stunt! But then again, The Madagascar Institute's motto is "Fear is never Boring".


*Opinions of the Madagascar Institute do not reflect the credo of F.I.B!I didn't really dig the fact that they were shooting tennis balls and whatnot into the canal. Plus they left their stage behind half in the water, it's there right now. Clean up after yourselves people...
Posted by Lisanne

You mean a 300 pound woman was zip-lining across the canal?! I think this is becoming a dangerous recreational pastime.
See
http://www.youtube.com/results?search_type=&search_query=+across+gowanus&aq=f
In this YouTube video a man is zip-lining to David Lefkowit's property (a.k.a. Toll House site).
Given that the EPA has declared how toxic this canal is, and how the firemen who had to get into the water to rescue someone a few weeks ago had to go to the hospital afterwards and take all kinds of shots, etc..etc..it should be illegal to use the canal for such dangerous thrill-seeking.
That would be our tax dollars if these people had to be rescued by police or firefighters.
And I am sorry to read that the Madagascar Institute were such a bunch of disrespectful to the environment jerks. I hope they don't intend to make Gowanus their playground.

Margaret beat me to it.

In the spirit of anarchism, I'm not so upset that they were there BUT without question they SHOULD have cleaned up a lot more. When that lady zipped across and crashed into the "time machine," I was first concerned about the chick who got bonked with the broken flourescent light tubes. Once I saw she was okay, I just thought-- what a bunch of fucking clowns. Great way to contradict their erstwhile "environmental" mission too.

Let me go smash light tubes at Burning Man and see how they like it. Hint to out-of-town thrill-seekers with too many
BAD tattoos: if you want to know feat, try doing that across Spring Creek or Gravesend Bay (both in Brooklyn, look 'em up), see how THAT works out-- both are totally possible but I don't think they have the guts to do it.

There is nothing to feat, but feat itself.

That bus makes me wistful for the 60s-70s. Love it! Art cars are great but that bus really does remind me of everything I loved about the 70s (I was a little to young to notice in the 60s).